Last time with the Diffys, Salem made friends with Ashley Beaker-Subject, grew into a teen, and the family went out around town. This time… 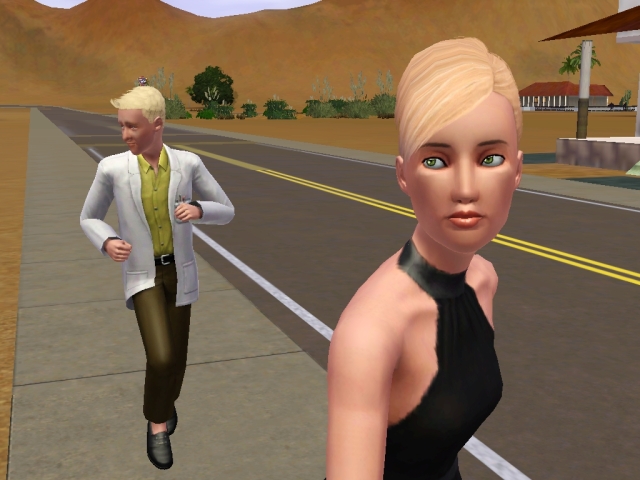 Here is a couple that I am really happy got together. Buck Grunt and Jill Smith are married. I don’t know why I like them together so much, but I do.  🙂

Now to the Diffys, spending the afternoon at the pool.

I think Bridgette is really pretty. She looks a lot like her mother, Lola.

I figured out that the pool lot is labelled as an art gallery, so Sims keep commenting on and observing the “art pieces” on the lot.

Cinnamon Bun: “All the scenery just reminds me of the Mona Lisa, all the artists should be proud.” 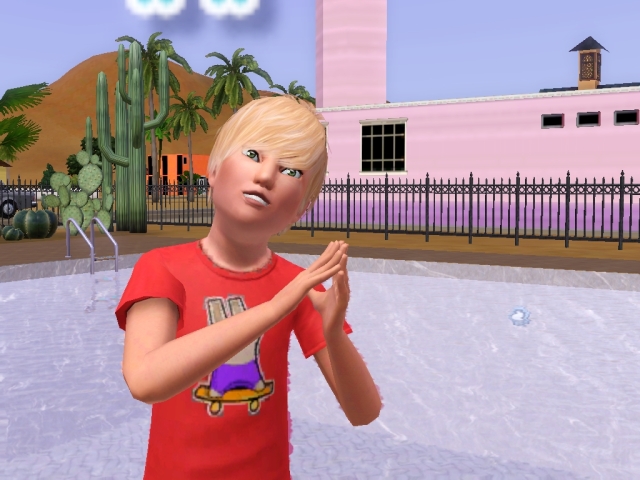 Salem: “Well I don’t know what you guys are going on about. Everything is crap, except for the umbrellas. Those are masterpieces.”

Bridgette: “Hey Salem, Ashley talks a lot about you.”

Salem: “Yeah, I bet he says that all the time about me.”

Bridgette: “I am soo excited to be in high school now and y’know I see Ashley a lot now and other new people I feel so grown up ’cause my parents let me go out by myself now sometimes and I like being a teen.” 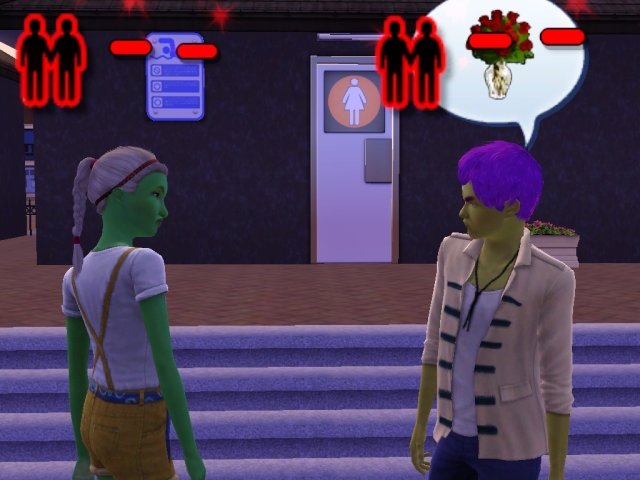 Bridgette: “Wait, are you a grumpy Sim?”

Salem: “So what? You’re so excitable you probably get excited over flowers!” 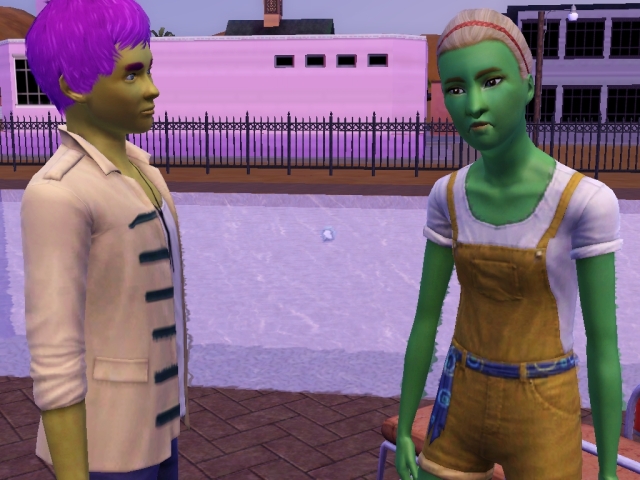 Bridgette: “Gah! All the cute boys have to be jerks.”

Salem: “That’s pretty harsh; you don’t even really know me.” 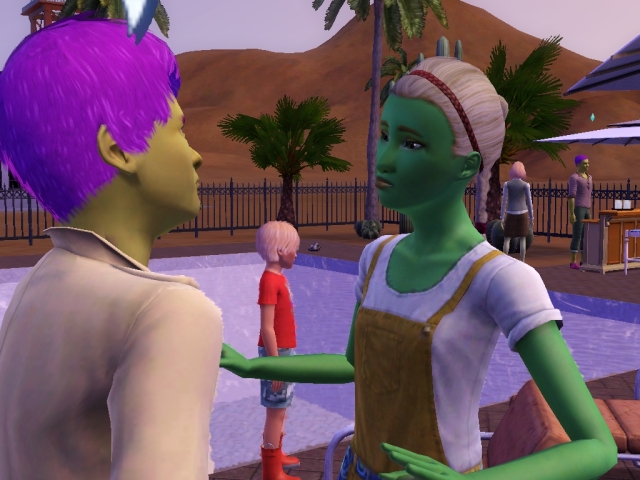 Bridgette: “I guess you are right. I shouldn’t have judged you like that and–”

Salem: “Where? My mom would love a snake!”

Salem: “Ok, that was pretty good.” 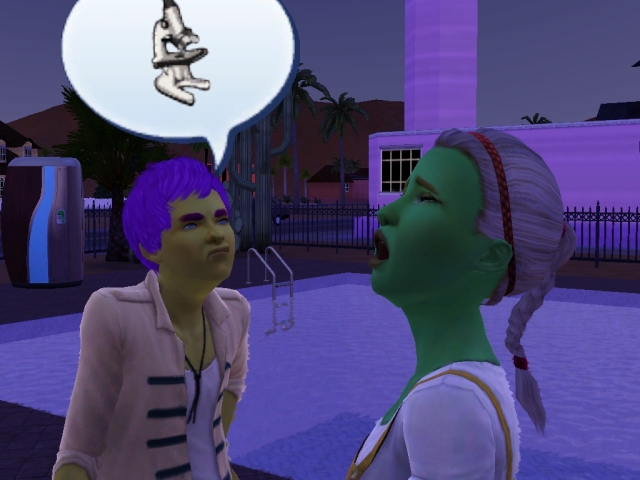 Salem: “I really don’t like the biology project we’re gonna have to do for next week.”

Bridgette: “I’m Salem Diffy and I think I’m too good for school.”

Salem: “Not exactly, I just don’t like doing the work I guess.”

Salem: “Ash does talk about you sometimes…like you’re really good friends. Maybe he likes you.”

Bridgette: “I just turned teen so I hope nobody gets any ideas so quickly.”

Salem: “Nobody’s trying to push you, I was just saying.”

Salem: “Take the attention as a compliment.” 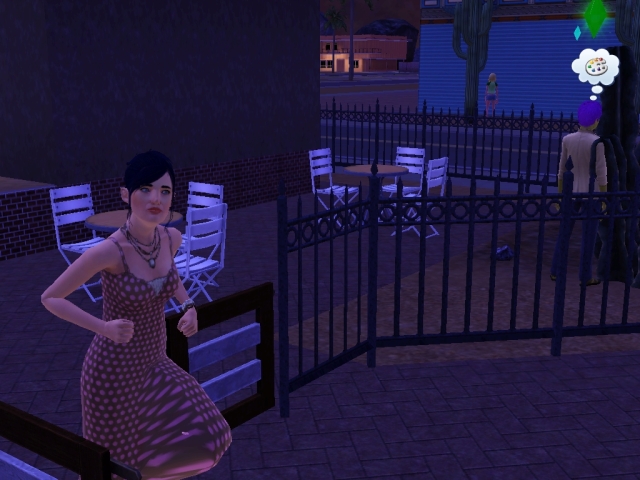 Emily: “Don’t be out too much later, Salem.”

First, who is that across the street?

Salem: “Hi, my name’s Salem. Have I seen you around school?”

Maura Beaker: “Maura. Maybe you have, I believe I’m a grade above you though.”

Salem: “That’s too bad. I guess since we can’t kill time in class together, maybe you’d like to go to the festival with me sometime?”

Salem: “Cool. Cool cool cool. I’ll see you later then, I’ve got to get home.”

She is SO attracted to you!

I know, finish your breakfast. 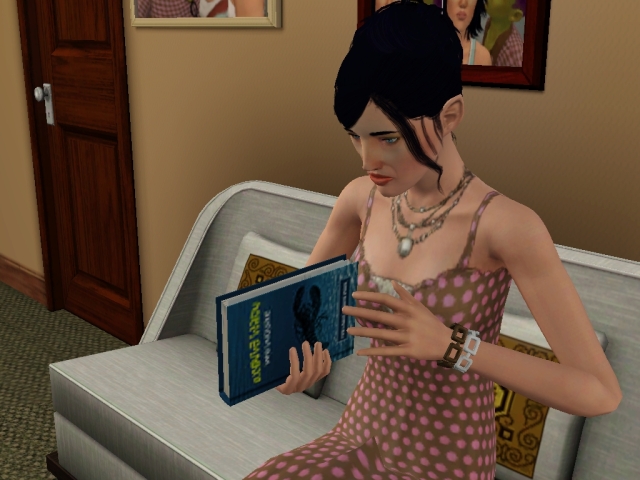 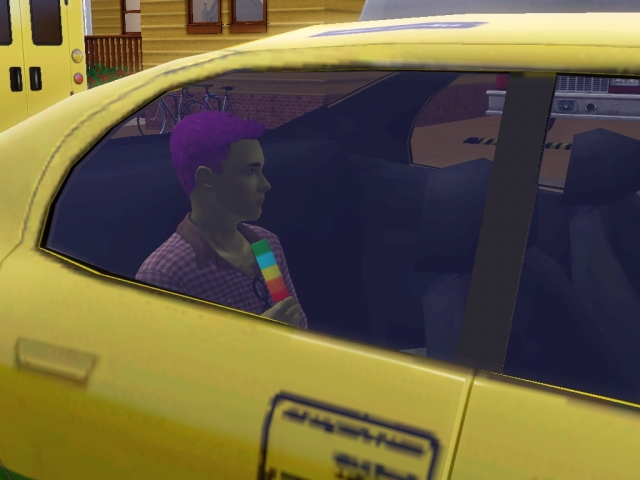 Wait, why are you leaving? 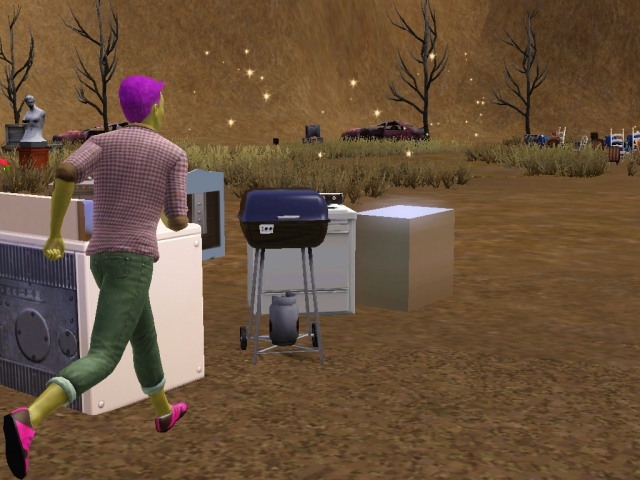 Cinnamon Bun:  “I needed a place to sit.”

I guess you couldn’t sit at our picnic table, could you? 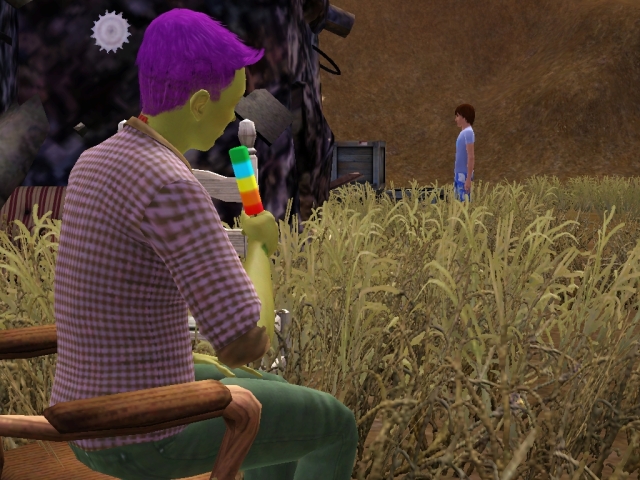 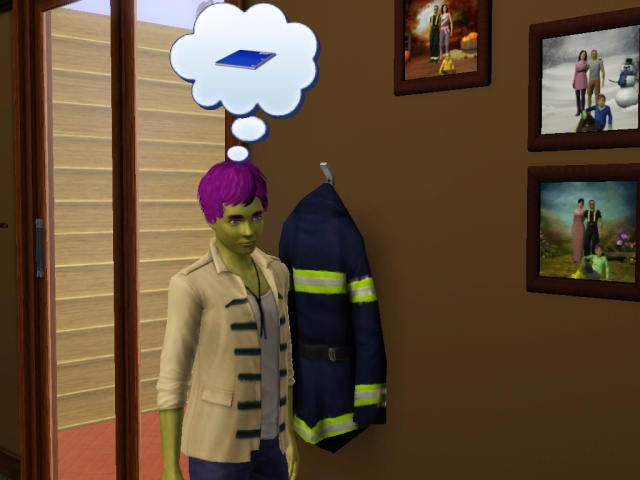 Salem: “Back from school, better finish my homework.” 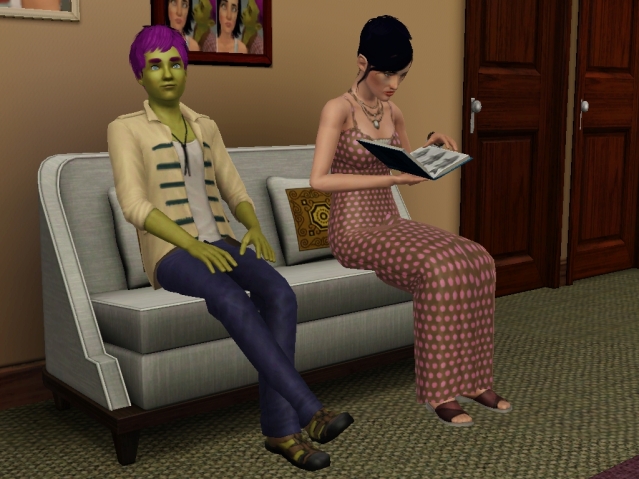 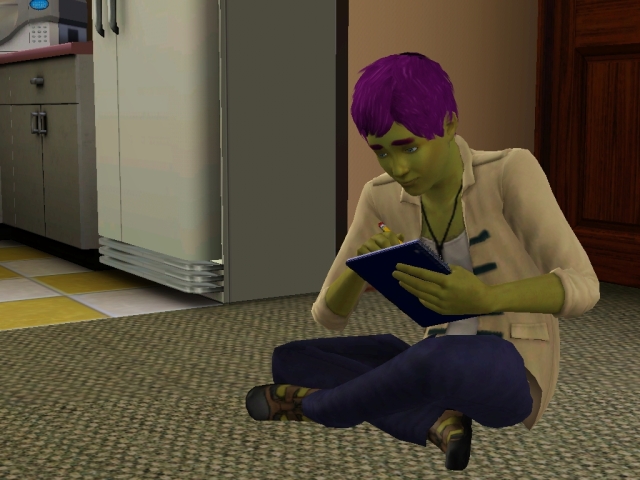 Cinnamon Bun: “The fire’s out. You’re fine. Have you seen this guitarist with the basketball?”

Cinnamon Bun: “Y’know, you wear a uniform like this?”

Cinnamon Bun: “Get it together!”

Ophelia seems like a really good mother, teaching her son to talk. August there is her son with Tank Grunt.

Salem is here at the park.

Salem: “Gah, I had a geography test today and it was awful!”

Maura: “That sucks I guess…” 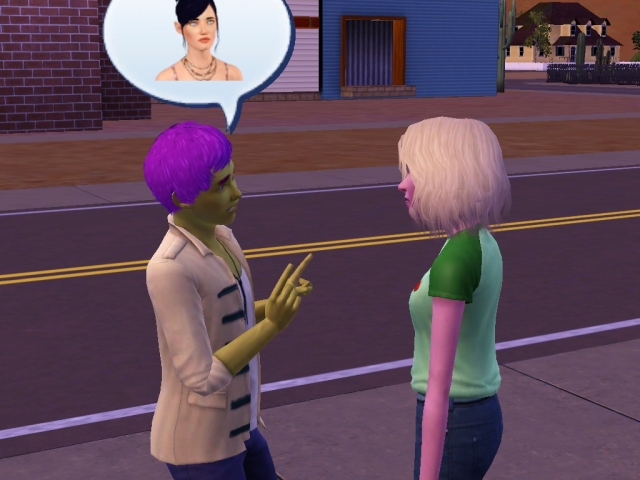 Salem: “Anyway, my mom is a little funny, she likes to collect a bunch of rodents and reptiles. It’s cool though.”

Salem: “And my dad is a firefighter. Sometimes he slacks off and watches Youtube. Only after the fire’s out though.” 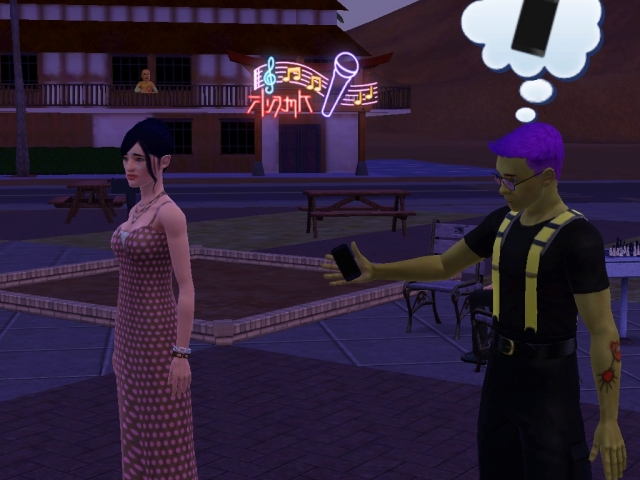 Parents here to ruin the moment.  😛

That baby icon could be looking down from the balcony.  XD

Salem: “So what about your family? You have siblings?”

Maura: “Um, I’d rather not talk about that, uh…actually I have to be getting home now.”

Are those really cheese fries?

Emily: “How about we turn tonight into a date? Holding hands and everything.”

Cinnamon Bun: “I’m up for that. Let’s head to Mick’s Master Karaoke.” 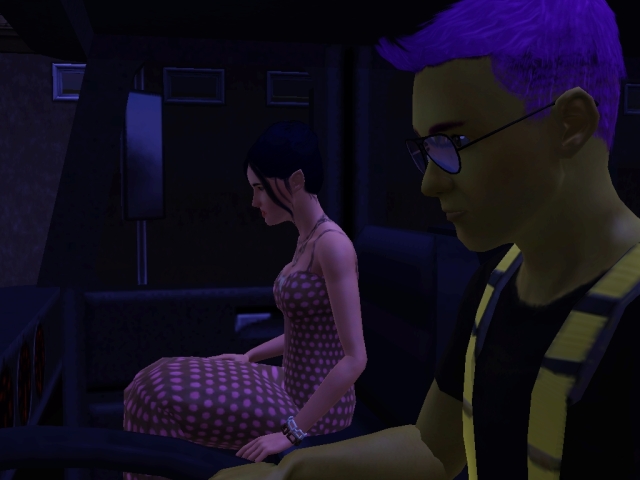 Is the night over? Not yet. 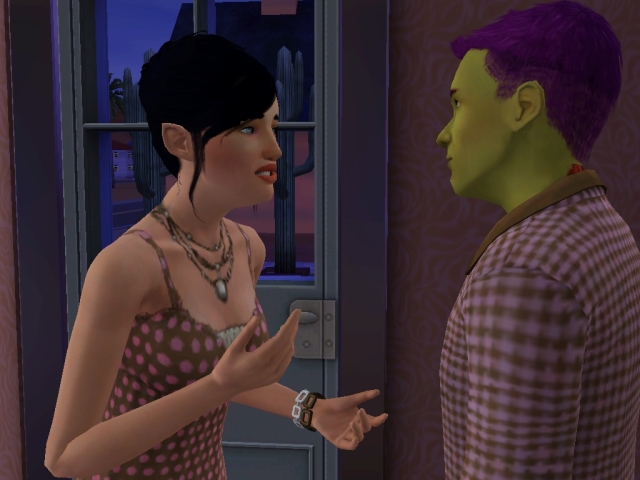 Emily: “So since it’s too late for a tattoo artist here at the salon, maybe I could try giving you a tattoo.”

Cinnamon Bun: “If you’d really like to. Let’s give it a try.”

C.B. is a little nervous about this.

Emily: “You needed more freezer bunny, I’m not good at the ears though.” 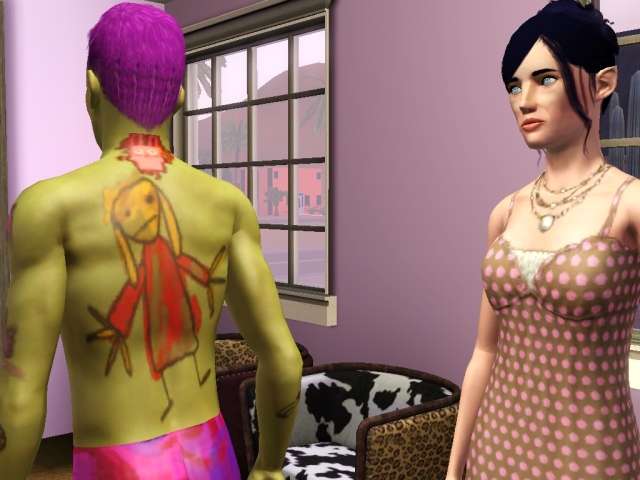 Emily: “And I gave you a sexy lady on your back! Just…take my word on that one.” 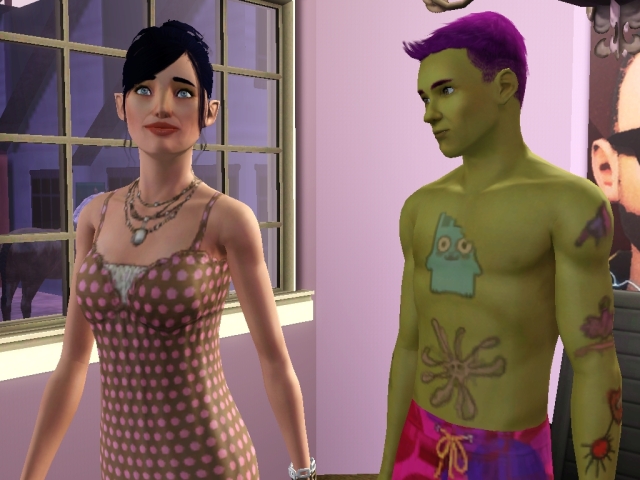 Cinnamon Bun: “Do I want to look in a mirror?” 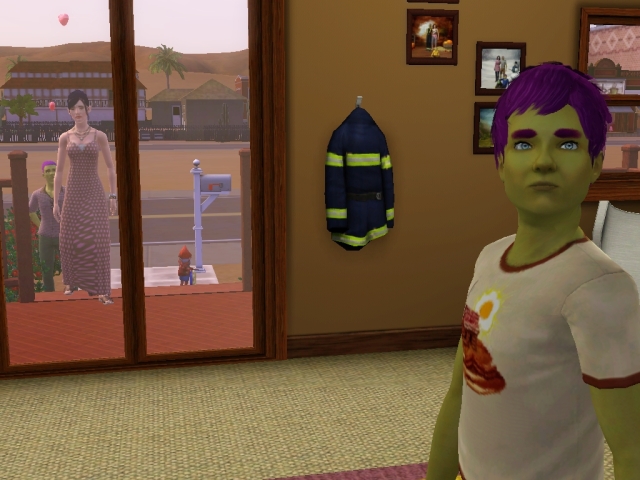 Salem: “My parents coming in at seven in the morning? Never speak of this.”

My lips are sealed.

Next time: More of Salem goofing off, and firefighting glitches.