Last time with the Diffys, the founding generation died.  ;_;  Also Cinnamon Bun aged into a child. This time… 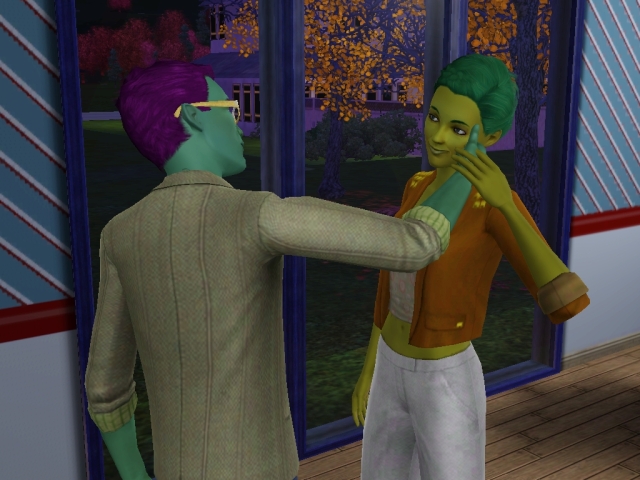 Jolene is still at the house.

Cookie: “Jolene, I know we haven’t really been ‘official’, and our relationship was kind of rushed because of C.B., but my parents’ deaths have made me realize how important the people in my life are to me.”

Cookie: “I guess what I’m trying to get to is, you are very important to me, and I want you to be a part of C.B.’s life. I’m asking you to be my girlfriend.”

Jolene: “Haha, you have to be so formal about it. Yes, I’ll be your girlfriend.”

Cinnamon Bun: “If you think I’m sleeping with a CAT, well…I’m just not.”

I guess that’s the only possible reason C.B. wouldn’t go to bed.

Cinnamon Bun: “Hey, you’re wearing my dad’s shirt, the one he never wears.”

Cinnamon Bun: “Hey, you must be the reason I need braces. Dad never had braces.”  >:I

Jolene: “You’ll be grateful later that you have those braces, and not my crooked teeth.” 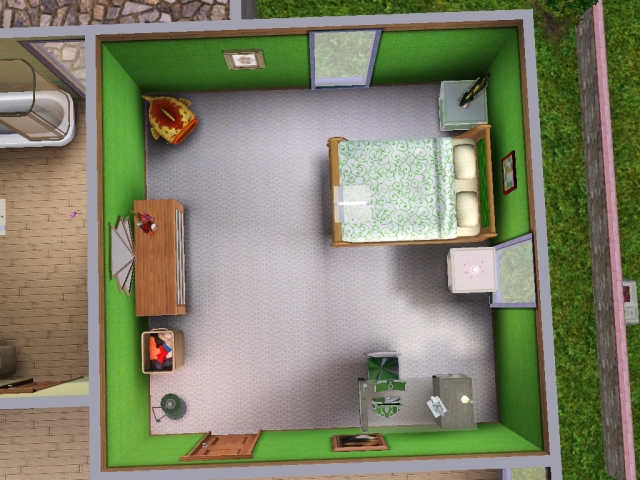 With Keely and Phil now not using their room, I moved Cookie into it.

And C.B.’s crib is replaced by an actual bed. 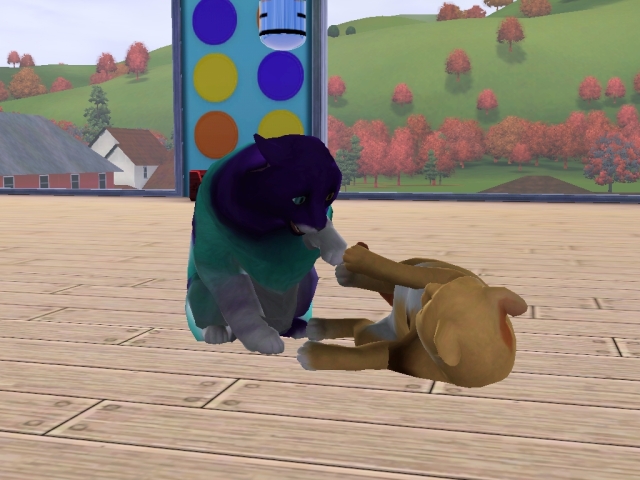 Prunelle: “Hey Arthur, I’ve been thinking…well, you are about to have your birthday, and I’m not getting any younger either.”

Prunella: “Well, I was thinking that maybe you would want to try to have some kittens with me–”

Buster: “You guys really thinking about that at a time like this? My favorite human just died!”

Prunella: “Anyway, what do you say?”

Arthur: “Whatever you want sounds good to me, Pruny.” 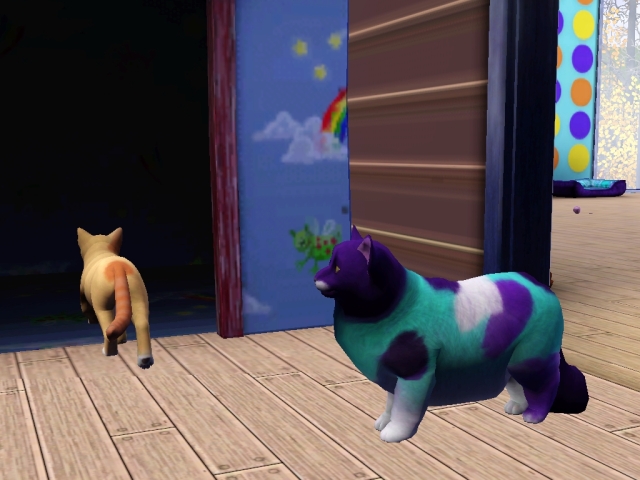 Yikes, I need to look away.

Arthur: “Ah, yeah, I’m glad you looked away…I don’t really want to have my personal business out on the internet…”

Prunella: “Well I can just tell them about it then…” 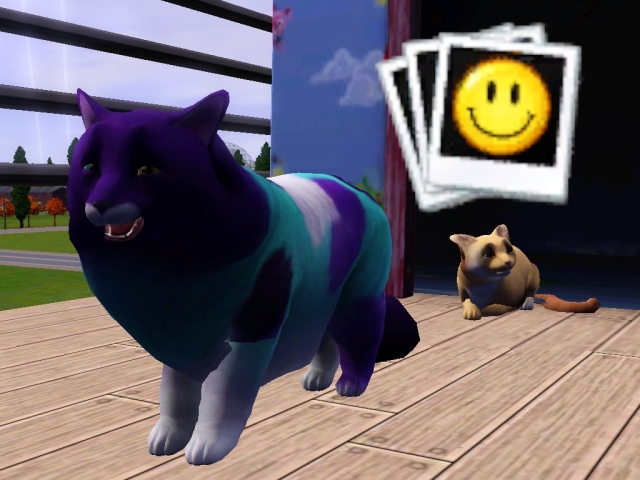 Prunella: “Haha, they know what we did anyway. That’s the only thing we use that cat house for.”

Arthur: “And this is my memory of when my now lifelong mate tried to embarrass me on the internet.”

This chapter should get a content warning due to “sexual situations” among cats.  o_o 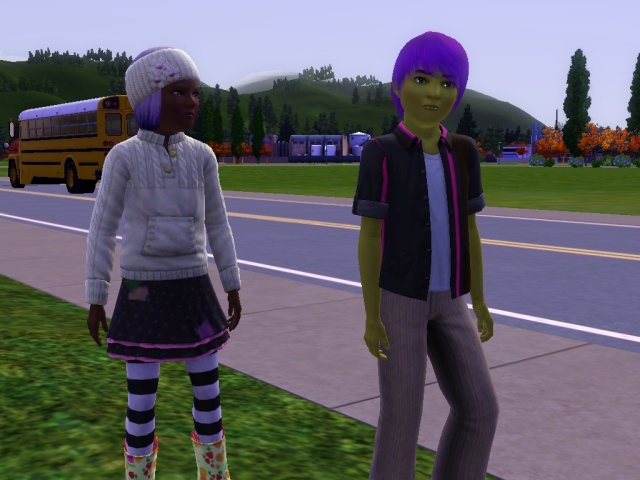 Marceline: “First day at school, you have to embarrass me. I did not fart! I’m pretty sure that was Darren.”

Cinnamon Bun: “Well how could I know that? You were both on the other side of the room…”

Finn asked Charlotte to hang out with him. I didn’t have the patience to wait for this lot to load.

Finn: “You pick this time.”

Charlotte: “Ok, get ready for my amazing song selecting skills!”

Charlotte: “Go with it!”

Cookie, Jolene, and Cinnamon Bun went on a family outing to the theater. Just because Charlotte’s mother is attracted to you, doesn’t mean you should tell Jolene, ok Cookie?

Poor Marceline was home alone because Moze was out performing sing-a-grams. 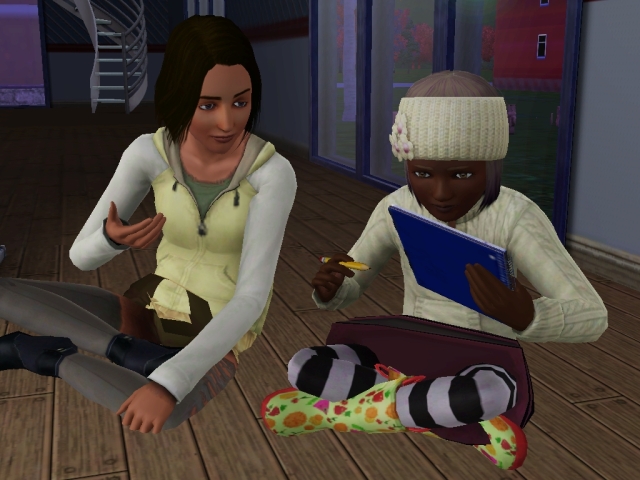 Good thing a babysitter showed up and helped her with homework.

Charlotte: “Haha, I’m totally a model. This cheesy lighting makes it even better.”

Finn: “That’s not a bad idea though. I can totally see you modelling for some diamond jewelry or something.” 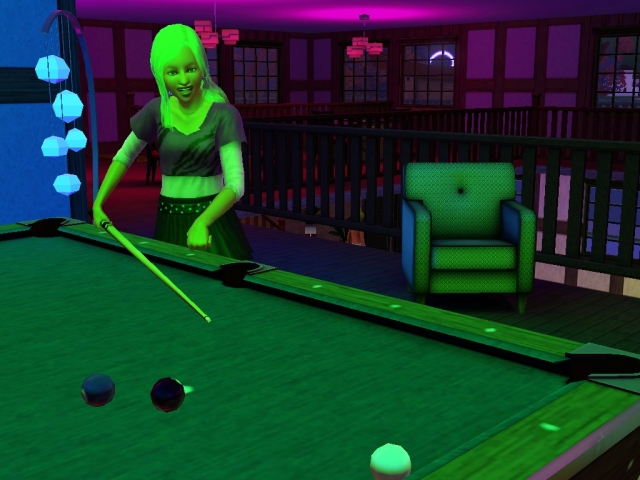 Charlotte: “I’m just happy when I don’t get a scratch!”

Finn: “We are both terrible really. We’ve been playing for an hour and barely gotten anywhere.”

Charlotte: “You’re right, pool is not our thing.”

Finn: “I’m getting a little tired actually. You want to sit down for a bit?”

Charlotte: “I’m tired too. It’s getting close to curfew time.” 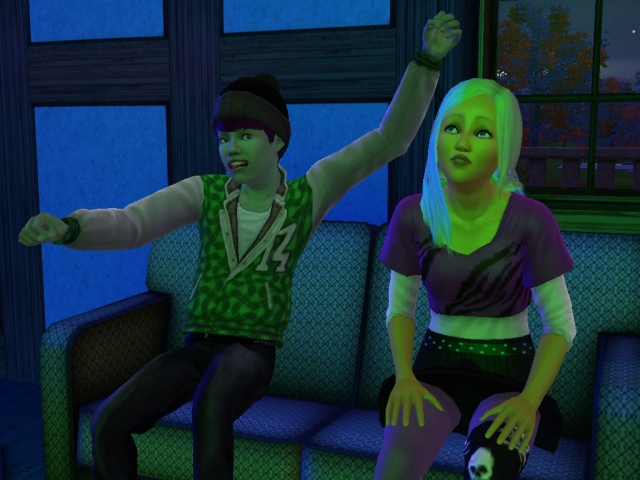 Charlotte: “Hmm. I think there is gum on the ceiling.”

Charlotte: “…and on the walls. Yuck.” 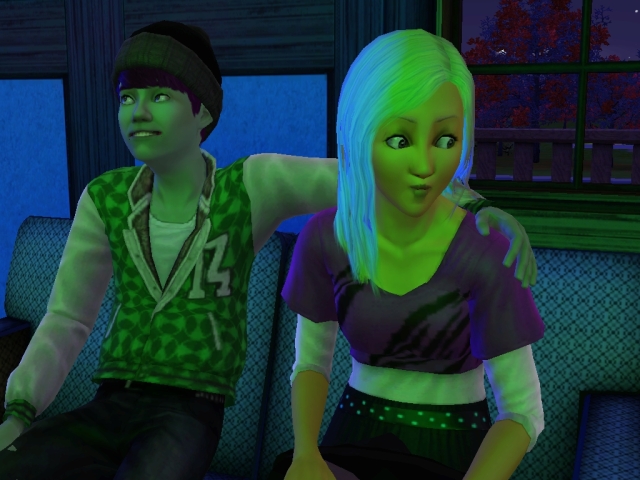 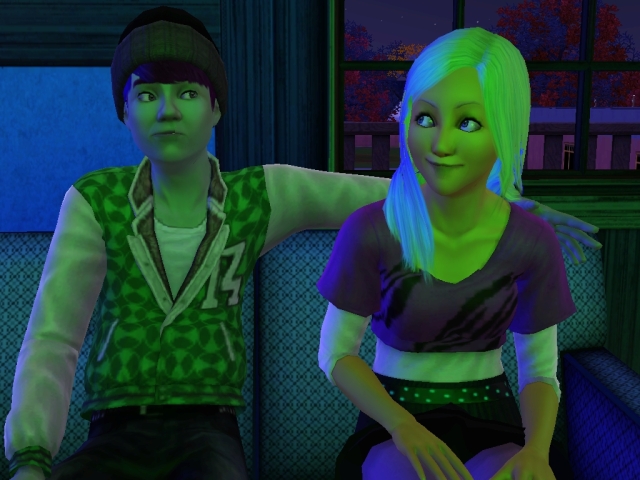 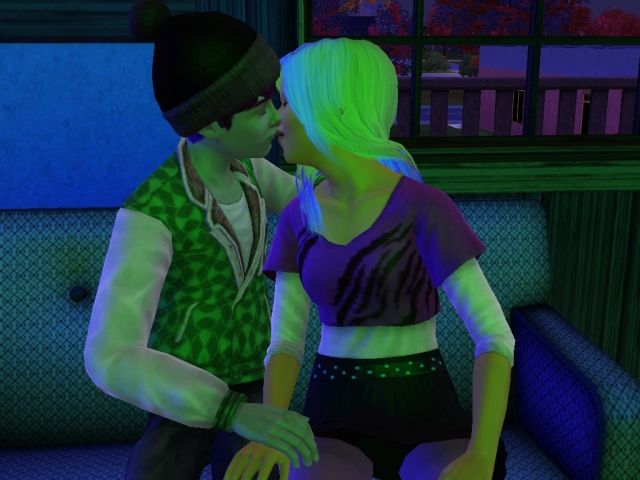 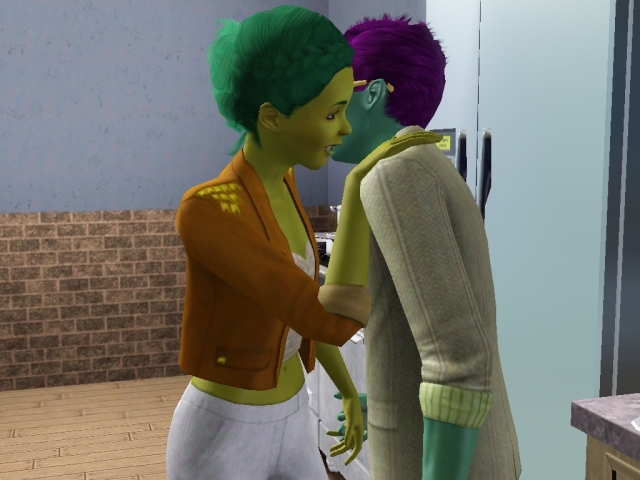 Cookie: “You haven’t seen my room yet, have you? You should come check it out.”

Alien: “Now what could be the purpose of this smashed orange globe?” 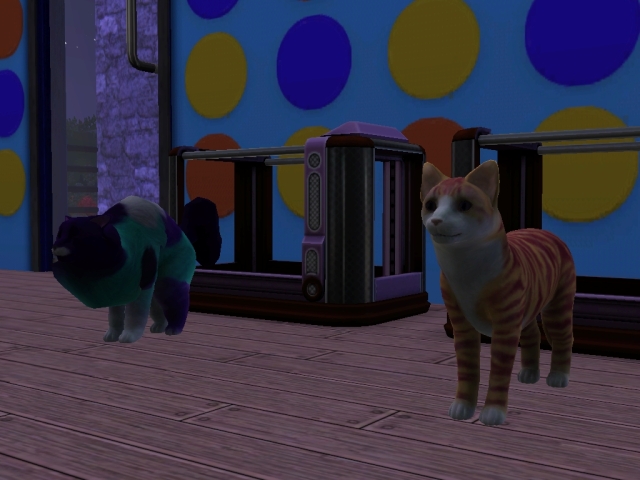 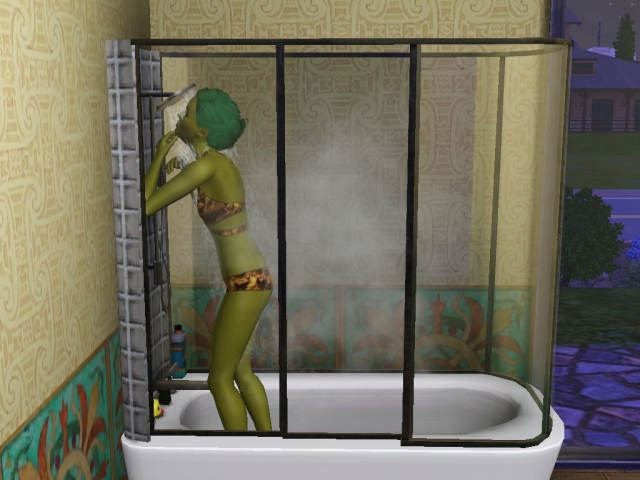 Jolene is a never nude. And now I feel a little creepy for watching her shower. And taking a picture.  o_o 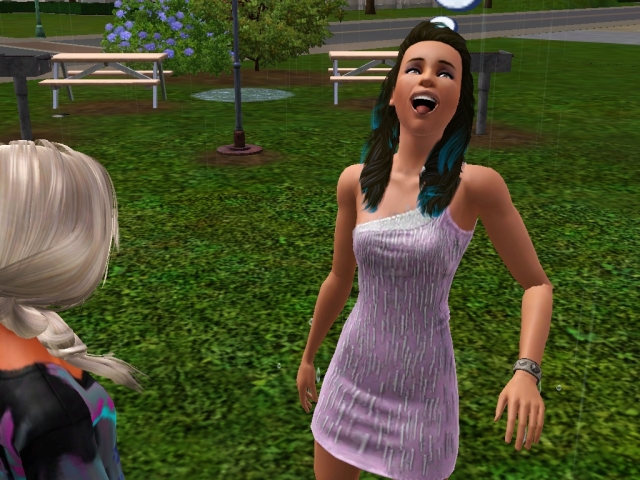 Moze has reached a level in her career where she no longer is forced to wear those outfits that remind me of bellhops (?). IDK, maybe bellhops were the point. I just thought it was weird.  😛

Francine: “Buster…I-I really want you to know right now that I love you.”

Buster: “I love you too, Fran. Is something wrong?” 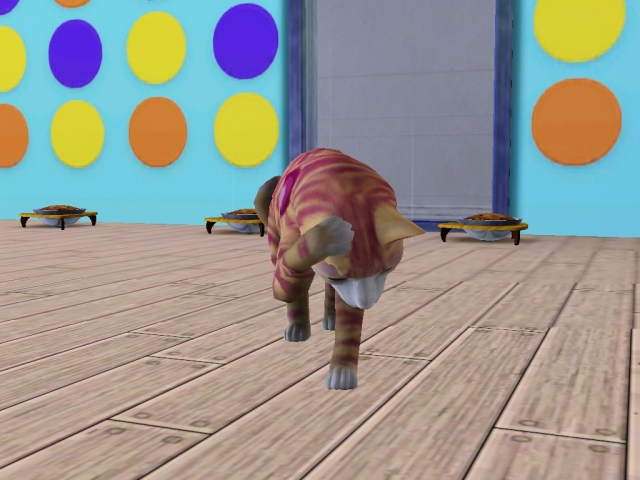 Buster: “Cookie the human? I think something’s wrong with Fran.” 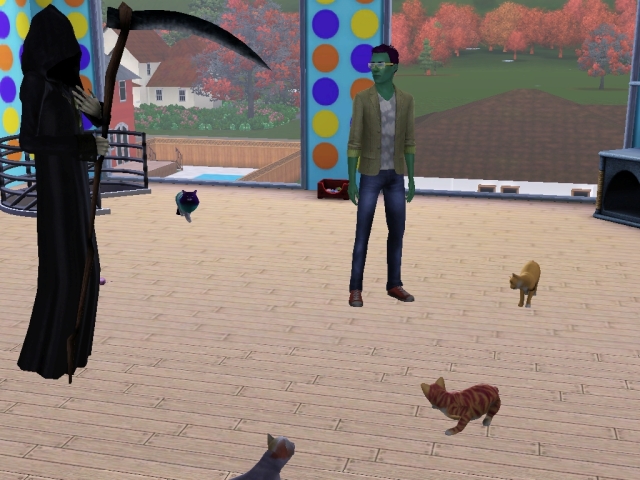 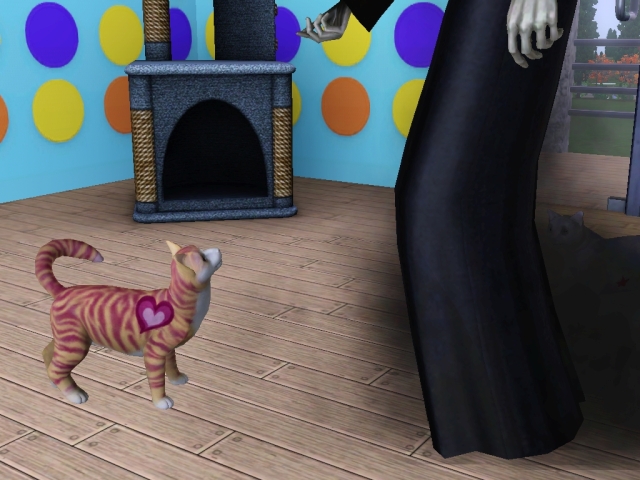 Cookie: “Francine has been in the family for so long…”  😦

Prunella: “I know this is kind of an inappropriate time, but I really need to use the litter box!” 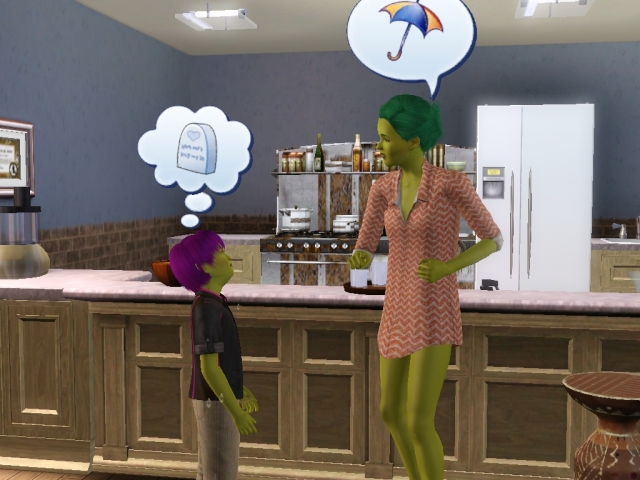 Jolene: “Your dad knows that umbrellas exist, right? You guys don’t have to come in all the time dripping and cold.” 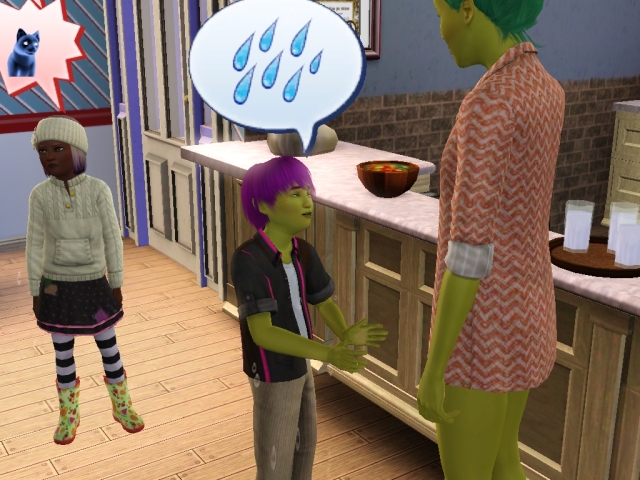 Cinnamon Bun: “Well the thing about that is, Dad knows they exist, and are pretty cheap too, but our Simmer insists on making us miserable.”

Bleh. I don’t want to deal with waiting on you Sims to get your umbrellas out. 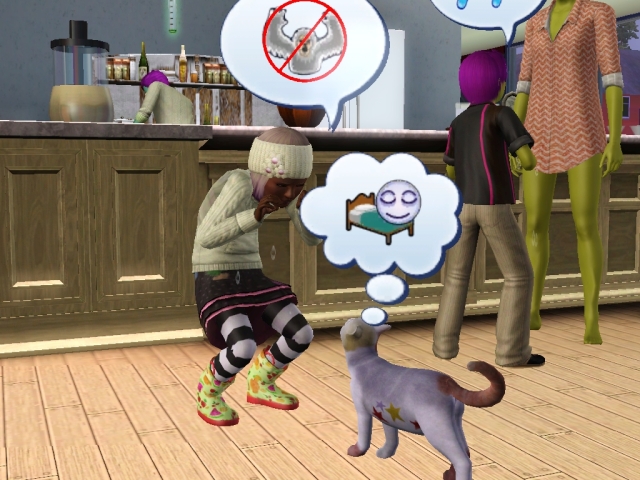 Marceline: “Rawwr! Watch out for the yeti, Buster!”

Cinnamon Bun: “I sure could use a vacation from this homework.”

Marceline: “How about Three Lakes? I’d like to see Bigfoot.”

Moze: “Hey everybody, I’m back from sing-a-grams.”

Finn: “You guys, I haven’t told anyone yet, but me and Charlotte kissed yesterday and I think we’re gonna start going out!”

Jolene has been over for several days. It’s time she got back home to make sure that her sister Meghann has not done anything crazy. I don’t know if I’ve mentioned it before, but Meghann is evil.

I have filled out Moze’s room a little. 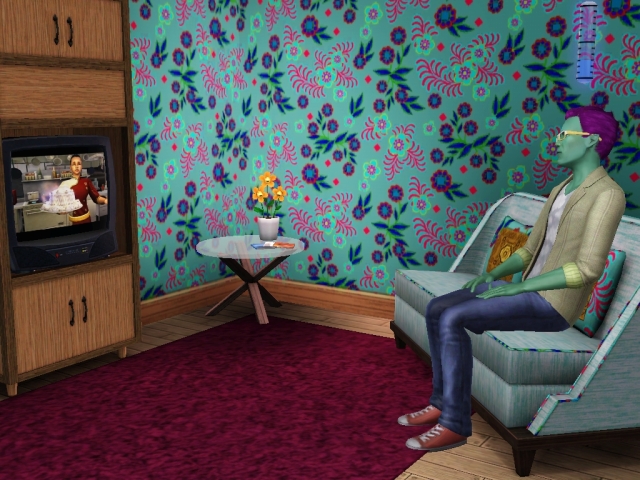 The TV is actually mostly for Cookie, so he can level up his cooking.

This family is so off sometimes.

Marceline has her own room now, but I think she gets lonely in there sometimes, since she chose Moze’s bed.

Next time: Arthur and Prunella’s kitten(s) will be born!